Yeah for no rain so the kids could enjoy a morning of donuts, decorating and having fun with their baseball friends. 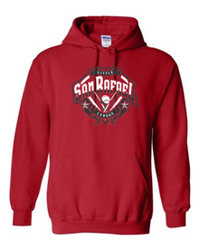 Orders will ship or be available for pick up within 1-2 weeks from Date of Order, pending product availability.

Orders will be individually packaged with receipt included. If you have any questions, please contact Anthony Brusati at abrusati@tandbsports.com or 415-453-2433. Thank you!

Our volunteer league depends on registration fees, sponsorship fees and community donations to operate. Please consider making a donation to San Rafael Little League by clicking the button below.

Guidelines for youth sports as it relates to COVID-19

Founded in 1954, SRLL has taught generations of kids the game of baseball in a fun, safe and competitive environment.

SRLL emphasizes age appropriate skills development and competition.  We believe in giving kids the opportunity to learn and play all different positions at our instructional levels in order to develop skilled players and competitive teams.

San Rafael Little League is a chartered member of Little League International and a member of District 3 in Northern California.  SRLL serves mainly kids in the 94901 zip code.

SRLL is entirely run by volunteers from coaches to board members. We are always in need of volunteers and cash donations so please check out the Donate button below to make a tax deductible contribution.

These fine organizations make what we do possible. Please show your support to these amazing sponsors and thank them for their commitment to our organization. Interested in becoming a sponsor? Click here to learn more about our sponsorship opportunities

We could not have such an amazing organization without our sponsors.

Tball:  Introductory league for 5-6 six year olds Played at Victor Jones Park.  Everyone hits off the tee each inning. Kids try to make outs but all hitters get to run the bases.  Runners advance only one base at a time.  Teaches the most basic skills.

Lower Rookie:  Coach pitch league for 7 year olds played at the Glenwood lower rookie field at Glenwood Elementary School.  Lower Rookie is an instructional division where every player bats once each inning and no score is kept.  Players do try to record outs and retired batters return to the dugout.

Upper Rookie:  Machine pitch league for 8 year olds played at Albert Park softball field.  Upper Rookie is an instructional division and is the kids' first introduction to more competitive elements of baseball such as three outs retires the side.  No score is kept.

Minors:  Kid pitch league. Minors is an instructional division for 9-10 year olds introducing kids to more competitive baseball.  It is played at Davidson and Glenwood.  Kids do all the pitching, it's three outs per side, stealing is allowed and a five run limit is imposed on offense.  Scores and standings are kept and there is a tournament at the end of the season with a league Champion declared.  All players must play at least two innings of infield per game- a fair play rule that is unique among local Little Leagues.

Majors:  Majors is a competitive division for 11 and 12 year olds.  This is the division represented at the Little League World Series and represents the culmination of many Little Leaguers' playing days.

50/70:  Intermediate league for 13 year olds played at Davidson Middle School where the mound is moved from 46 feet to 50 feet and the bases are moved from 60 feet to 70 feet.  Great transitional league for kids who want to keep playing baseball but may not be ready to jump to Juniors.

Juniors:  For 13-15 year olds. Played on the full size field at Albert Park with all the traditional baseball rules.